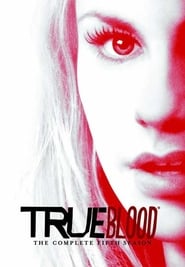 The fifth season of the HBO supernatural drama series True Blood premiered on June 10, 2012 and features twelve episodes, bringing the series total to 60. It picks up right after the events of season four. It is loosely based on the fifth book in The Southern Vampire Mysteries series, Dead as a Doornail, but incorporates much more of the following books than the previous seasons have.