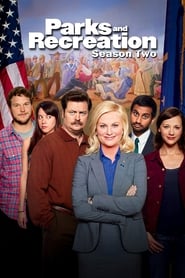 The second season of Parks and Recreation originally aired in the United States on the NBC television network starting September 17, 2009, and ended on May 20, 2010. The season was produced by Deedle-Dee Productions and Universal Media Studios, and series co-creators Greg Daniels and Michael Schur served as executive producers. Like the first season, it focused on Leslie Knope and her staff on the parks and recreation department of the fictional Indiana town of Pawnee. The episodes were approximately 22 minutes long each, all of which aired at 8:30 p.m. on Thursdays.

All of the members of the original principal cast were retained and Chris Pratt, who made guest appearances throughout the previous season, joined the permanent cast in the second season. It also featured guest appearances by Louis C.K., Megan Mullally, Fred Armisen, Will Arnett, Justin Theroux and John Larroquette. The writing staff made changes based on feedback from the first season and attempted to be more topical, with episodes touching on such topics as same-sex marriage, the arrest of Henry Louis Gates and the sex scandal of South Carolina Governor Mark Sanford.

Although the first season received generally mixed to negative reviews, the second season was critically acclaimed, with some reviewers declaring it one of the best comedies of the television season. Nevertheless, Parks and Recreation continued to struggle in the Nielsen ratings and averaged about 4.68 million household viewers per week, lower than Thursday night NBC shows Community, 30 Rock, and The Office. Amy Poehler was nominated for the Primetime Emmy Award for Outstanding Lead Actress in a Comedy Series, and both the series and actor Nick Offerman received nominations from the Television Critics Association Awards.