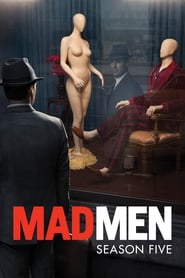 The fifth season of the American television drama series Mad Men premiered on March 25, 2012, with a two-episode premiere and concluded on June 10, 2012. It consisted of thirteen episodes, each running approximately 47 minutes in length. AMC broadcast the fifth season on Sundays at 10:00 pm in the United States.

Season 5 takes place between Memorial Day 1966 and spring 1967. The season explores Don Draper’s new marriage to Megan, which leads him to ignore his work at the Sterling Cooper Draper Pryce advertising agency. Meanwhile, Lane, Pete, Roger, Joan, and Peggy learn that it is “every man for himself” in their personal and professional lives, as they each face painful new beginnings.