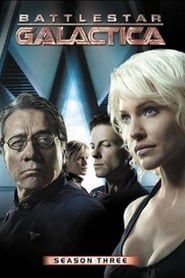 The third season of the reimagined science fiction television series Battlestar Galactica premiered on the Sci-Fi Channel in the United States on October 6, 2006, and concluded on March 25, 2007. Unlike the previous season, it was not split into two parts and did not have an extended hiatus during the middle of the season. The third season contained 20 episodes.